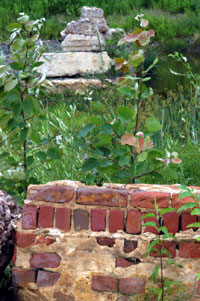 Constructed on what was once the site of all the major Vinton Colliery buildings, the History Wetlands covers over seven acres. Once the busy industrial heart of Vintondale, by the early 1980s the site had been abandoned, demolished and had become a dump. A Rural Abandoned Mineland Project in the early 80s covered over the abandoned site with waste coal, leaving a large expanse of raw bony or waste coal four-to-eight feet thick across the site. AMD&ART had to remove all of that waste coal and then construct the new wetlands. It took a complex partnership with multiple agencies to make our History Wetlands a reality.

After the AMD leaves the final treatment pond, the now-clean or "legal" water is used to create the seven acres of new wetlands. We have transformed this area into our History Wetlands because the wetlands are on the site of the original Vinton Colliery. Here, where black bony, or waste coal, once barely supported scrubby grasses and stunted trees, the new wetland environment is attracting a variety of birds and wildlife, as well as human visitors. It is also within in these wetlands that the past of the site is most tangible, as the footprints of the old colliery buildings rise from the wetlands as ghostly reminders in the landscape. Our hope was to bring Vintondale's history back to the surface, to celebrate both its proud past and its future commitment to environmental improvement at the same time. In addition, all three of the site-specific installations — the Mine Portal, the Great Map, and the Clean Slate — are within the History Wetlands.

The collage to the right depicts the Vinton Colliery Washery and Power House in 1906 (top), an overlay of the old colliery on the reclaimed land (middle), and the colliery site today (bottom).