The Mine No. 6 Portal 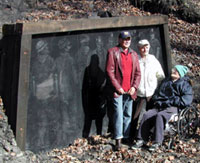 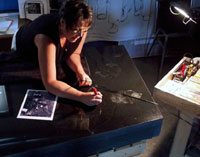 Adjacent to the History Wetlands and across the Ghost Town Trail from the Great Map stands the Mine No. 6 Portal, our Miner's Memorial, an opportunity to acknowledge and reflect on the hard lives of those who worked underground. The reconstructed six-by-twelve-foot mine portal entrance stands exactly where the once-bustling Mine No. 6 Portal entrance was located (the original opening was caved in for safety in the 1960s). The image of men in the middle of a shift-change, taken from 1938 home movie footage contributed by Vintondale resident Julius Morey, is now etched life-sized in black polished stone. Nearly one hundred people were on site for the unveiling, three of them men that had once worked in Mine No. 6 and entered through that portal. The interpretive signage is not yet completed, signage that will further acknowledge the many men that worked underground, but we already know from local reports that this may be the most powerful of all the images on the site.